CATEGORY: Way unsupported by anyone!

While I installed the Windows 8 Developers Pre-release build last week as soon as I could, I was rather tied up all week in that I was running my App-V training class, so I didn’t have time to do much more than look at the iCandy and try to figure out how to terminate a metro app when I’m RDP’d into a Hyper-V box to access the console view to the Win8 VM and no touch screen (hint: Task Manager).

Before I talk specifically about App-V on Windows 8, let me talk a little about Applications in general on the platform.

Microsoft is making this “Developers Build” available specifically because they want developers to start using the new tools to develop the new style applications for the platform. Called “Metro Style“, these apps will only run on Windows 8 (at this point there is no talk about back-porting the support to Windows 7). Microsoft is continuing to woo developers by significantly enhancing the library support to make it easy for someone to develop an app with a very rich user interface and integrations, with adding only a few lines of code. As a developer, I am very impressed, however tainted in knowing those apps will not work on today’s desktops too. 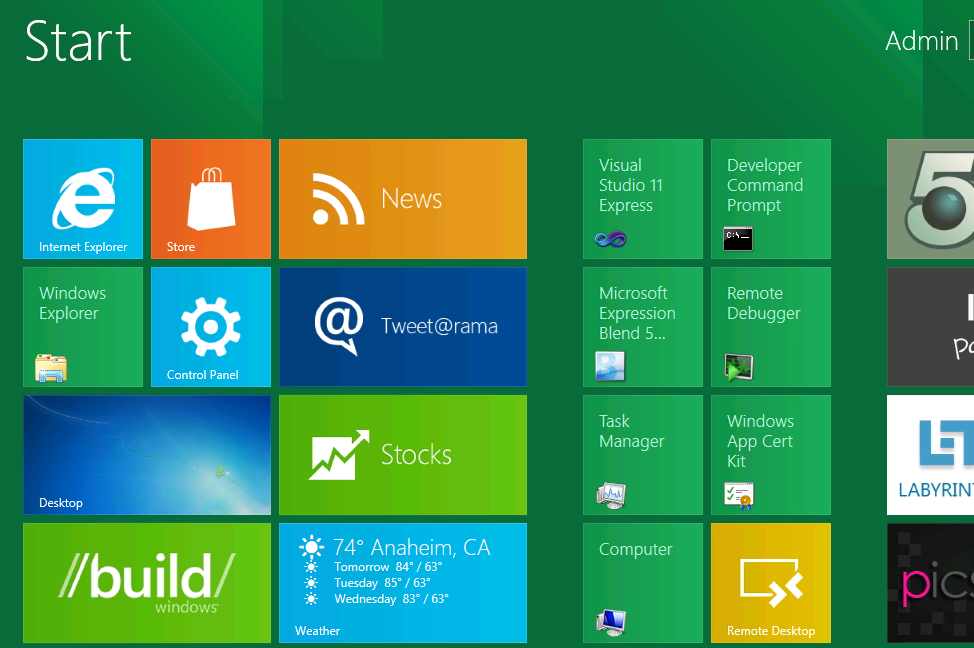 These Metro Style Apps have far more native interfaces than traditional apps. Considering how App-V provides control (both good and bad) over interactions this is a concern to me. Finally, however, Microsoft is getting serious about application certification. Microsoft will have an app store, and certification is necessary to get into the store. They also integrated the certification process into the development tools to encourage more usage. Of course enterprises will likely want to also purchase directly from vendors, but hopefully application deployability will improve.

As you would expect from Microsoft, the platform continues to support applications developed for previous platforms. If it runs on Windows 7, it should run on Windows 8. When you log onto Windows 8, rather than the windows desktop you see a new “Start” application (shown above), which is a Metro Style app that is part of the OS. In it, you see all of the Metro Style apps installed. Each app is shown in a tile, which can be a static icon or a dynamic updating application (such as the weather app). You can click on the Desktop tile to access the traditional Windows 7 style desktop (minus the traditional start menu as I’ll explain later on).

In spite of rumors, I don’t see any App-V embedded into this build. I will admit I didn’t look too hard, but I don’t see it. App-V continues to be important for “legacy” (if you can call what you would build with the currently shipping Microsoft Visual Studio 2010 tools legacy) applications. If anything, it will be more important under Windows 8 as IT becomes more used to dealing with Metro and “forgets” how to deal with Win32 and DotNet. Not to mention that nothing ever goes away!

As App-V stands today, it doesn’t have a play with these new Metro Style apps, which will be delivered with something Microsoft calls AppX packaging, but that would be as of today. When I get to playing with the Sequencer, I expect that it will be possible to package up these into App-V in case I wanted to.

So this weekend I thought I’d try something unsupported that probably should fail at the install. In installed the App-V 4.6 SP1 client into my Win8 OS. I figured it wouldn’t install and that would be the end of that test.

But it installed. I did have an install issue, but it wasn’t the client, it was the vbscript I use to install the client into “stand-alone” mode. That script writes some settings into the Windows registry and it seemed to fail at reading/writing to the registry. I haven’t looked into it, but I think the registry access from VBscript has changed (it uses the RegRead shell object with strings like “HKLM\SOFTWARE\Wow6432Node\Microsoft\SoftGrid\4.5”). Any way, I was able to manually go into the registry to fix things up.

I verified the installation by starting up the App-V management console. (From the metro screen, start the Settings app, scroll the left side list down to more settings to launch the old control panel, then go to administration tools and find the client. Otherwise use the windows explorer to find SftCMC.msc). The console worked OK, so the client installed just fine, eh, I think.

So next I installed my App-V DeployNPublish tools to work with the stand-alone client. I tried adding a package and had a problem. No error, but no app either. This turned out to be the valid OS list in the OSD file. The app had been created with all of the known OSs listed, but Windows 8 isn’t in the list (nor is it possible to add it with the current client). Fortunately, I can remove all OS references from the OSD files which disables the OS version checking when launching an application. I load in the package again, and it loads in (shown below with a desktop icon).

I do the same with a sequenced Adobe Reader app.

I can see that the sftfs.fsd file (the “App-V cache) grows as expected, providing further evidence that the client is working. I can see the applications in the App-V Client Management Console, and in my AppV_ManageApps alternative console, shown below. 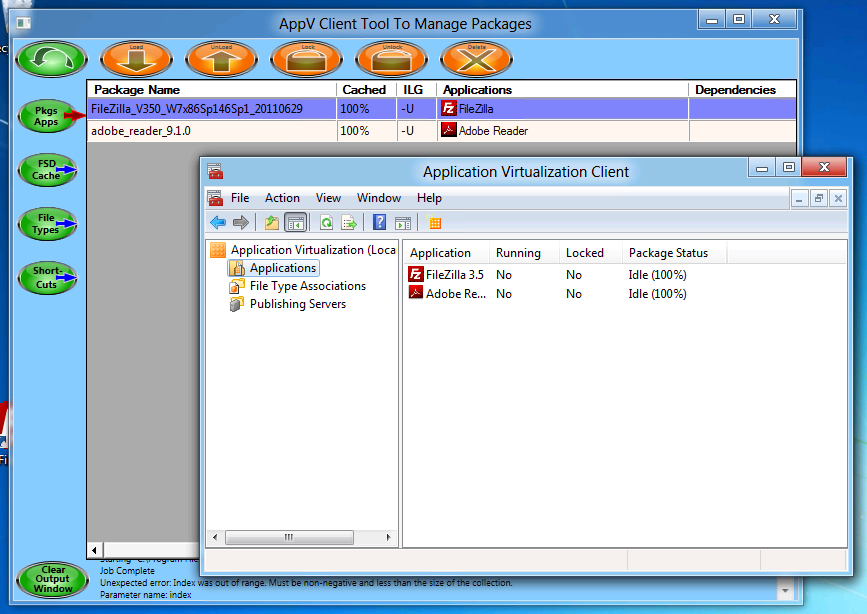 Of course this build of Windows 8 doesn’t have a start button with the apps like we are used to. So how to get at the app that was published to the start menu? Windows-C and select search (shown on left). This shows a list of the Metro Style apps, so click on Apps, which gives a full list of traditional and Metro apps presented alphabetically (shown below). Maybe not my choice to find apps and I’m hoping the traditional start menu appears in later Windows 8 builds. Any way, as is seen in the screen shot below, not only do my AppV_ tools that are traditionally installed show up, the virtualized Adobe Reader app shows up also.

[Edit: It seems that some traditional install apps and some App-V apps do get added to the “Start Application”. I’m not sure of the criteria as only some of these appear.]

Now I try launching. Because the AppV_DeployApp tool prefilled the cache, I see the App-V tray bar shows up just above the tray icon notification area in blue indicating 100% cached, but I get a launch error, 39-0000010B, shown below: 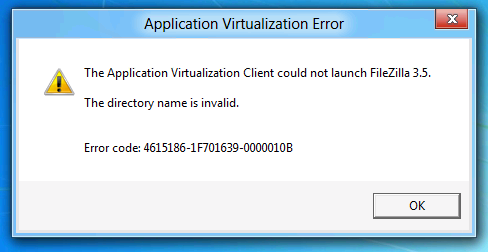 Not a familiar error to me so I go to the TMurgent website and run the “A Failure To Launch” Silverlight app to diagnose it. This is a documented message as is shown below: 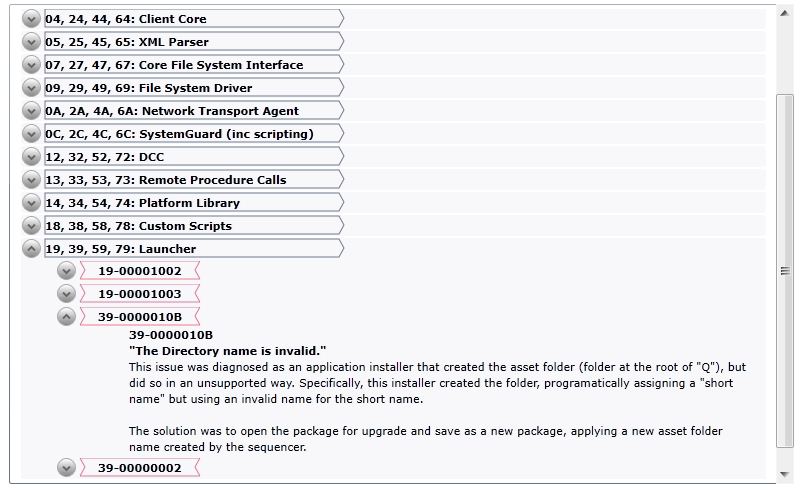 Since 4.6.1 added the auto-generated “short names” for the asset folder, I decided to bring in a 4.6 sequenced application instead. This app used an “8.3” compliant asset folder name so the short name would be identical to the long name. This app launched with the same error.

I also noticed that either from an external windows explorer or cmd prompt, the Q: drive isn’t as accessible as it was in Windows 7. From the Windows explorer, I can see the Q: exists, but cannot even enumerate the folders like I can in Windows 7. In the command prompt, I can’t issue a “Q:” command to change drives. I also tried turning up the debugging level on the App-V client, and I don’t see anything of further value (other than noting that the loading of osguard.cp uses the short name of the asset folder, which probably helps to explain the documented error.) At this point I don’t think this is a “short name” issue, but a general issue in accessing the virtual drive asset folder. I am going to keep looking to see if I can make progress, but at this time it is looking like we will need a new release from the App-V team.

I haven’t heard any rumors that an App-V release is coming, and I would be surprised for them to release support for this dev build of Windows 8. When the Windows 7 beta came out they released “4.5 CU1” so I can hope for that anyway.

Stay tuned to this blog for updates as I learn more.