Earlier this year I placed a survey on the TMurgent home page for folks to provide some simple input about their App-V usage. This post provides a review of the results of the highly un-scientific survey. I didn’t advertise the survey nor did we have an email campaign.

The entries were made between January and September of this year. And it would be fair to say that most of the people filling out the survey did so because they came to the site looking for App-V information, meaning that they were already using App-V or were looking to do so. We had a total of 26 completed surveys.

Question 1: The first question was what version of App-V they were using in production. 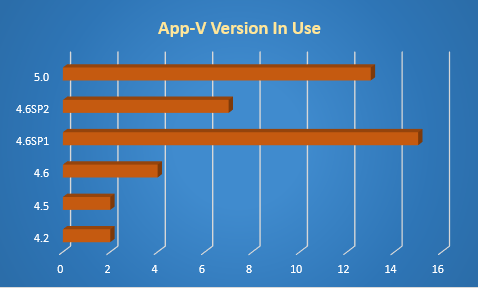 It was surprising to see the really old versions still in use. I probably should have asked what version they intend to deploy this year, but didn’t.

Question 2: Here, I asked for their (primary) location. 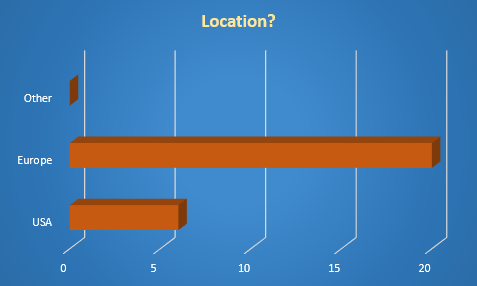 The survey results are far stronger from Europe than expected. App-V (and SoftGrid) have long had a strong presence in Europe, but I really doubt that these results reflect the installed usage. More likely, the Europeans were more willing to participate.

Here is the question broken down by country: 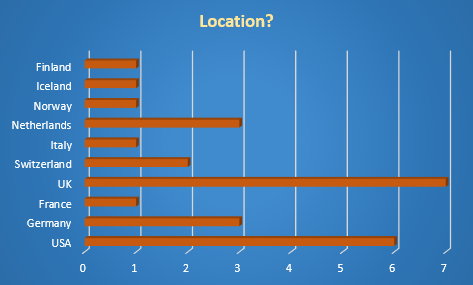 Question 3: How do you deploy the virtual apps? 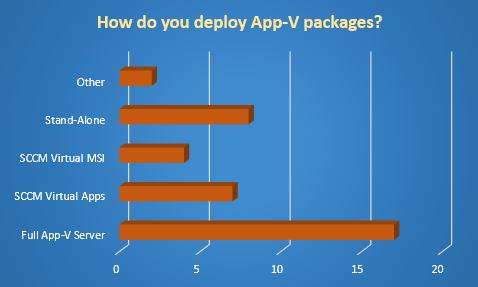 I suspect that this result would surprise those at Microsoft responsible for App-V. I am seeing more of a balance between the App-V server and SCCM deployments in my class, but these tend to be customers new to App-V.

Question 4: Years of experience with App-V? 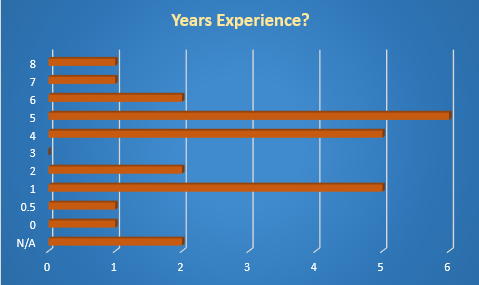 That is an average of 3.6 years experience.

Question 5: What training have you had? 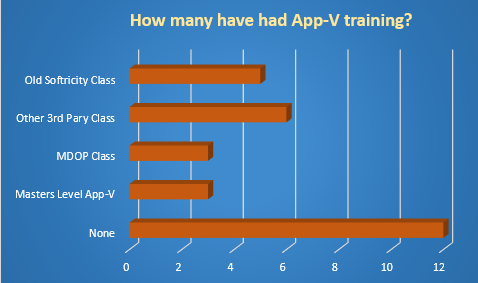 I am guessing that these numbers reflect that all of those people we have trained never visit our home page, but have bookmarks to the pages they regularly use.

Question 6: What percentage of apps are virtualized? 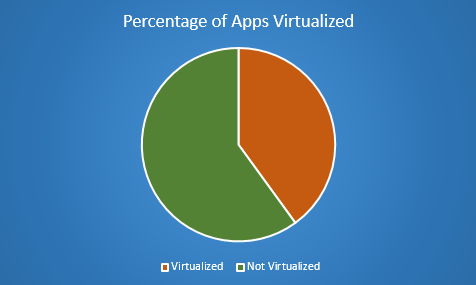 The average company had 44% of the apps virtualized. The survey size is not sufficient to really break the numbers down more, but the companies with the highest percentages were using the App-V server to deploy. One respondent indicated that 400 of their 400 apps were delivered using AppV (via the App-V server). It is reasonable to assume that those with a good ESD solution (like SCCM) in the environment, even if it is not used for App-V, will have a lower percentage than those without.

Project VRC did run a more general, but more complete, survey this year that includes some questions about Application Virtualization. You can get a copy of the State of the Union survey here.