It’s summer. My new book is almost published, and I’m cutting back on my golf (well, a little) due to a bad ankle. So what do I do? Dig into the App-V 5.0 Beta, of course! With lots of shiney new thigs to look at, plus a few dark corners with cobwebs to poke into, it is almost as good as going into the candy store when I was a kid.

I talked a bit about what I have been finding at the Calgary System Management User Group last week, and I will be going into more detail at BriForum in Chicago in July. But I have also been playing around with some tooling, for which is the purpose of this post.

I developed a windows service that can be used insead of the Management Server or SCCM to centrally deploy the virtual applications in a very simple way. Like the free AppV_DeployNPublish tools that I have for App-V 4.6*, this allows for deployment using just a registered file share and Active Directory OU with application groups for assignment. The implementation in this version is quite a bit simpler than the previous version, using a single background service to do the work of three tools before.

The service doesn’t yet handle either dynamic configuration files or connection groups, mostly because there is some missing client support at this point of the release cycle. Hopefully those APIs will be complete in the next drop from Microsoft. But the other part of this is that I’m not sure how companies are going to manage the connection group objects (no matter what deployment method). Will they use an AD group? Under the same OU or separated out? Naming conventions? We have time to figure this out.

The other tool I am working on looks like an instant winner. It is a client debugging tool, shown below: 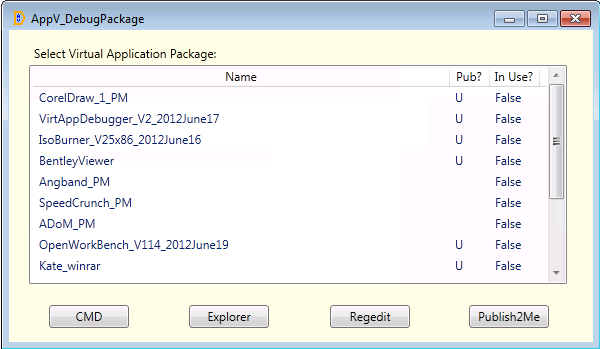 Just launch this tool, click on the deployed package that you want to debug, and select the debugging tool of choice. The tool will be launched inside the virtual environment of the selected package. No more OSD editing or messy shortcut editing! The regedit doesn’t work right now, due to a client issue that I’ve reported, so until that is resolved we have to launch the command prompt inside the VE and then type regedit (not the end of the world).

I will probably add additional tooling over time, but I don’t want to move too fast as we can’t be sure what new surprises will be in store by the time a final release. And no, Microsoft still isn’t giving anyone a clue when that will be!