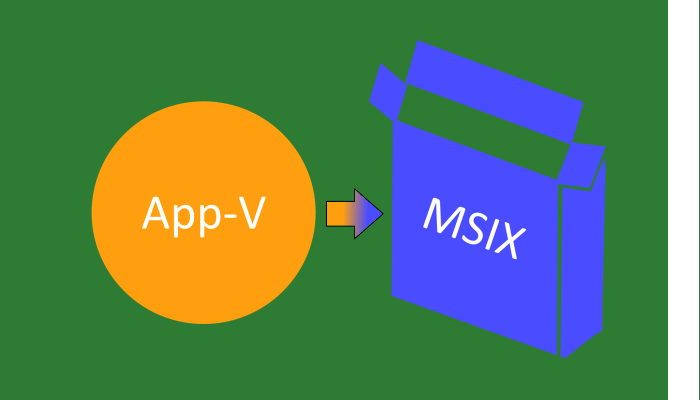 Customers that use Microsoft App-V are certainly interested in the potential future of MSIX. While the compatibility levels for typical applications under MSIX is not yet acceptable overall and we will be continuing to leverage App-V for years (decades?) to come, I believe that it is important for them to begin the job of working with MSIX apps when we can.

MSIX eventually will offer a better model for providing applications to end-users in our organizations; but this comes at a cost in needing to develop and learn new packaging, deployment, and support operational procedures.  When software vendors eventually make to the move to MSIX, you will be forced to figure all that out, so my argument is that it is better to start work on that sooner, while it is optional and you can delay implementation when issues pop up, because end-users already have access to the app delivered in a different form. This will be preferable than to be under pressure of delivering a new app with no other option available other than MSIX.

One question I often get from customers is around the possibility of converting existing App-V packages into MSIX directly, rather than re-capturing the vendor installer again.  There is some support built into the Microsoft MSIX Packaging Tool, both through the GUI and a command line interface.  This article looks at using the command line interface to automate the process.

Microsoft has an article outlining the use of the command line interface in a Microsoft Tech Community blog post  including a PowerShell script to perform bulk conversion. I found the details in the script to have some issues that I needed to fix, and while I was there of course I added a few improvements which I can share here.

Before I do, there are a few points to share from my experience that you should understand before taking on such a project.

First, no matter how you create an MSIX package from an existing Win32 or .Net Framework application, we know already that only a portion of them are compatible today.  In the latest MSIX Report Card testing we can see that only 60% of Enterprise applications are suitable for repackaging into MSIX today.  But only 30 % are suitable without the Package Support Framework being added and configured, an open source project for add on code to improve compatibility fixups that allow traditional applications to be remediated to work inside this new container.

Packaging with the Microsoft MSIX Packaging Tool, either using a vendor install capture or command line interface, does not add this remediation — a significant difference from your experience with App-V where similar capabilities are built-in.  Building the package through a capture of the vendor installer and adding in the PSF, such as by using PsfTooling, allows us to get to that 60%, but there is no option to add the PSF as part of this conversion process.

Microsoft Partners that offer repackaging tools may have workflows that allow the PSF to get injected.  These alternatives come at a cost, however, but if you already own their tools you should investigate their options.

But the bottom line is that no matter how you convert or migrate, you need to have realistic expectations going into it.  Mass conversion using this technique is easy to do, just be prepared for limited success.

I ran a set of 75 App-V packages using the scripting below.  The script averaged under 2 minutes per package, less than 2 hours using a single VM for this set.  I ended up with 16% of the packages as ultimately acceptable to Enterprise standards. If you want to try it, here is what you’ll need:

Here is an example of a package with an issue. This one can be solved by packaging differently:

Here is an example of a package with an issue due to a limitation in the length of the package name:

Here is the PowerShell script:

And here is the XML file used as a template for the command line conversion tool. There is no need to edit this file.